Trump has created a better and more democratic election process for the Republican Party.

Posted by admin in Current Events, Featured Articles, Politics on 03 4th, 2016 | no responses

For the 2016 Presidential election cycle, right from the start, the Republican Party (GOP) offered more choices for President than the Democratic National Party (DNP). So just in terms of numbers of serious candidates the GOP did better than the DNP. There is no question that Hillary was the establishment candidate for the DNP. Bernie just did very well with idealists and surprised everyone and especially the Democratic National Party.

If there is no FBI indictment against Mrs. Clinton, she will become the Democratic nominee.

So is this true democracy? Of course not. Its some crippled version of  democracy merged with political aristocracy.

Think about it – in a nation of 300+ million people, we get a candidate from the same family who has occupied the White House for 8 years. Bush did the same.

And it was not a good thing for the country or for democracy in the U.S. in general. 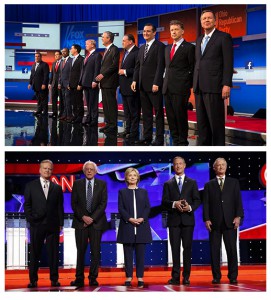 Though Jeb Bush was the establishment candidate, Donald Trump created a political Improvised Explosive Device (IED) and dislodged Jeb.  Donald Trump did to Jeb Bush what Obama did to Hillary. But Trump has had to fight a lot more than Obama.

So what Trump has done is to offer the American people more choices and choices that actually bring a sense of democracy to the election process. If you recollect, by this time, John McCain had already wrapped up the GOP nomination.

What we have here on the Republican side is classic democracy with the Presidential front-runner (Donald Trump) pushed forward by the people.

What we have on the Democratic side is anything but democracy.

In my opinion whatever Trump may be – he has enhanced and strengthened the democratic process in the country, at least for one party.

So if Trump wins the GOP nomination or becomes President of the U.S.A., I am quite sure that at least he earned it the hard way.

For the record – I like President Obama. He won fair and square and has proven to be a measured, pragmatic and dignified President.