Retrogaming is Back: Now on a hand-held called the GPX2 Wiz

Posted by admin in Featured Articles, Gamers and Gaming, Technology on 08 13th, 2009 | no responses

A few years ago, I’d picked up a Tapwave Zodiac 2 off eBay. This was a fantatic Palm 5 OS based product from a defunct company. I happened to get a brand new boxed product and for a few bucks more at Amazon.com was able to get a game or two optimized for the Zodiac. But few commercial application titles were published for the Zodiac.

Today, The Zodiac is better know for its ability to play games from many different consoles from the last decade such as the Genesis, SNES, NES at terrific speeds. By “speed”, I mean the ability to play a game made for another system at exactly the kind of speed at which the game should be played (having a slow game performance beats the idea of playing video games doesn’t it?).

To play game, the first step is to get a free software for the Zodiac called “Little John Z”. Install this software on your first SD card slot on your Zodiac (for some reason this does not work on the second slot).

Get the software from here:
http://little-john.net/

Next, you need some ROMs. ROMs are packages containing code that used to come in cartridges many years ago. There are many such sites that can give you ROMs. ROMNation is one. Google for ROMs. and you’ll get a dozen sites that allow you to download ROMs for free. Get the edition of ROM for your region if possible.

While Little John plays ROMs from many old consoles, stick to the SNES and Genesis as they have the best games.

Drop these ROMs files into the SD card in the correct folder, using a SD card reader. Then insert the card onto slot 1 on your Zodiac.

You can launch these games using the Little John launcher icon now available on your Zodiac.

More recently, a Korean company, recognizing the market for a hand-held emulator friendly console, released the Linux based GP2x and the GP2x Wiz. The GP2x has the advantage of being an in-production unit but is more bulky than the Tapwave Zodiac. But I see that this platform is going to get very popular soon as vendors such as ThinkGeek.com carry the product now. 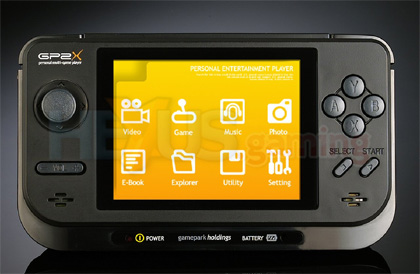