Many analog features on a digital shortwave radio

The Grundig S350 Deluxe is absolutely a lot of fun to use. If you are shortwave buff like me, you’ll get a real bang out of this model. I had an old Sangean for a long time and after I dropped my radio once too often finally had to look around for a new shortwave radio and decided to go ahead with model although the one I have is branded as “Eton” which probably is the OEM supplier for Grundig.

I had no problems tuning into several major short wave broadcasters from across the world. The radio is a bit cheaply made with plastic that is painted to look like metal but apart from that I found the sound, reception, sensitivity and power consumption all quite respectable.

You can pick this model from anywhere between $50-$100 on the internet from various sources including eBay and Amazon. (You’ll probably get a Chinese manual along with the radios priced around $50, but English online versions are easily available for download).

If you’re not into shortwave radio, try getting hold of a cheap unit. In the world of HD Radio, XM, Internet Radio, it sometimes is a welcome change to listen to old school commentaries and discussions over shortwave.

Some manufacturers to consider for shortwave radios are: Sony, Grundig and Sangean. 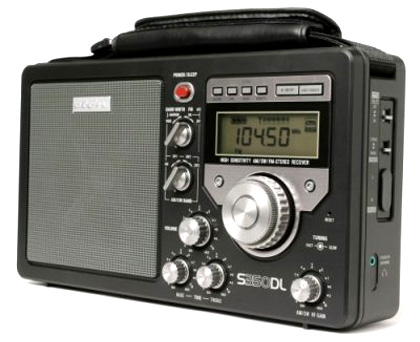